Making movies isn't easy, especially if you're trying it for the first time. The pros make the process seem smooth and natural, but the detail and precision of movie production require an unbelievable amount of work.

Promoting a movie, if taking less time, requires even more focus on detail – in a 15-second teaser or a 3-minute trailer, every second counts, so production and editing are more important than ever. If you're pretty experienced in video editing, you're probably adept in Premiere and Final Cut. But if you're just getting started, you can produce and edit a professional-grade trailer for free & online. I'm going to go over five basic things to keep in mind when editing your trailer:

I'm also going to be giving some examples of how to accomplish some of these edits using a free, online video editing software called Kapwing. By using Kapwing, you can collaborate in real time with the rest of your team and use free cloud storage to store all your drafts and works in progress.

Get the Timing Right

The most difficult part of adapting a long-form film to squeeze it into just a minute or two of trailer is adjusting the pacing. For most typical trailers (there are exceptions, of course) it's not feasible to use largely uncut scenes. But by cutting portions of silence and non-vital lines, you can condense a full-length scene of action into just a few seconds. Take this short segment from the Motherless Brooklyn (2019) trailer:

Without sound, it's painfully obvious that the scene has been chopped into shreds and pasted back together like a patchwork quilt. It's unnervingly fast-paced, and the responses are impossibly quick. But with the music and dialogue added, it works, and the hyper-condensed scene effectively introduces some plot & character:

It can take a ton of trial and error to make edits like this work well. So it's important to find a way to experiment with your scene cuts. Kapwing has a handy "Add Cut" feature in its Studio trimmer, which allows you to insert scene cuts of any length and play around with their placement and timing until they're just right:

Flexibility is vital in the editing process! So if you want to adjust, move, or remove a cut, the portion you cut out is instantly retrievable – both audio and video.

Make the Most of Narration

The brevity of a trailer is the greatest limiting factor of its effectiveness. For many trailers (but certainly not all!), some form of narration can help to convey a tremendous amount of plot, tone, character, & intrigue in a small amount of time.

A traditional narrator is sometimes a good idea, but slightly more creative narration techniques are often the answer. For dramatic public events, a television broadcast can play over the scenes it describes, and for condensed backstory scenes, the protagonist can tell her story as the screen shows it in bits & pieces. Take this excerpt from the beginning of the same Motherless Brooklyn trailer, for instance:

Edward Norton's narration in the trailer glosses necessary character points with surprising candor over the course of just 10 seconds. The type of narration is crucial, as well – anything other than first-person introduction would not have been nearly as effective in conveying the situation.

Kapwing allows you to import audio files from any location – clips you record yourself, historical speeches, poetry readings, news briefs from YouTube. Any of these could make for a compelling, effective opening narration. You can click "Audio" to import any file or paste any link, and adjust the time your audio layer is playing, the portion of the file that you want to use, and the playback volume of the audio track.

Split Up Your Title & Text Frames

Trailers are meant to call viewers to action, so the priority of a trailer is to cultivate interest in a film and convince the viewers that they should see the rest of the movie. One common device that movie trailers employ in order to leave certain things unanswered is breaking up a tagline (or otherwise clever snippet) that interrupts the action and builds anticipation and drama. A great example of this can be found in the classic teaser for 1996's Independence Day (here at 4x speed):

Of course, this device also serves to smooth out potentially disruptive scene & setting changes. For this purpose, intertitles of acting credits, production credits, and release dates are just as effective. Kapwing lets you make scenes of any length with custom text, pictures, and animated effects, just by clicking "Add Scene" on the left-hand side of the Studio. By clicking & dragging these title cards in the scene list, you're able to use them as transitions between your trailer's scenes, and reorder them however you want.

Be Careful With Your Music

An effective music track can enhance a trailer dramatically, but poorly chosen or poorly presented music can disrupt and hamstring an otherwise well-executed trailer. The payoff of perfect trailer music can be tremendous, like in the masterful trailer for Where the Wild Things Are (2009):

But unless you have a specific plan in mind for dynamic, precise musical & lyrical integration, like in the trailer above, it's best to play it safe.

This might mean choosing music that matches your overall atmosphere, but doesn't vary dramatically in dynamic or tone, since mismatches between music and video can ruin the impact of a trailer. Or it might mean simply going with a track that doesn't have any lyrics – the perfect alignment of words & scene can be incredibly impactful (as we see in Where the Wild Things Are), but you shouldn't force this gimmick without the right opportunity. An instrumental track can do a lot of work for your trailer – developing atmosphere, establishing historical/geographic setting – while still giving you flexibility and control over your trailer's timing, spoken lines, and tone.

Work As a Team

If you're working on a tight schedule, or have a deadline to make, working on your own or asking your team to work independently on the same project can severely hinder your project's quality and workflow. Professional filmmakers often have the luxury of working in physical proximity and are able to work efficiently as a group, but remote work is most likely a harsh reality for smaller, less established filmmakers and amateurs.

When you're not able to work side-by-side with your team, you'll need to find a way to edit together. Using streamlined communication lines (like Slack or Zoom) is a good start, but you can be far more productive if your team is able to watch and edit the same video at the same time, like you're able to do in person. If you're using Kapwing to edit your trailer, all you need to do is click "Share" at the top of the Studio window. This gives you a shareable link to your Studio project that your team can all edit at the same time. When one person adds a scene, trims the music, edits a title, or zooms in on a shot, the edit will appear on everyone else's project instantaneously. What might have been a week-long grind involving emails, DropBox links, and drafts with names like "FINAL_finaltrailerV5.mp4" can instead be accomplished in just one night of synchronized collaboration on the same draft.

For more tips & tutorials on convenient, high-level video and multimedia editing, check out the Kapwing Resources library! We're constantly working to improve our product for all types of collaborative, streamlined content production.

Related Articles:
• How to Edit Videos With Kapwing
• Video Sound Editor
• Video Editor For YouTube
• How to Zoom In on Video 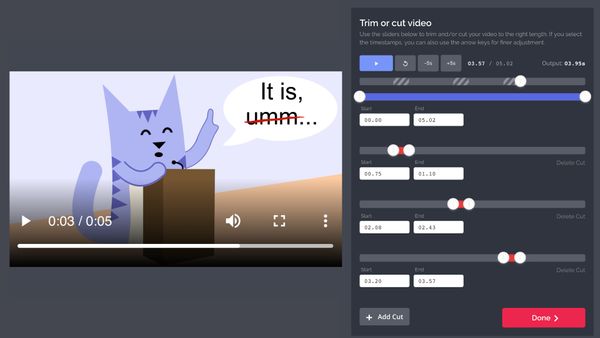 Recording voiceovers, interviews, speeches, and conversations isn't hard to accomplish, but it can take hours to get the perfect take. Luckily, you don't have to! I'm going to show you a streamlined method of cutting out small, unwanted parts of a video using Kapwing. 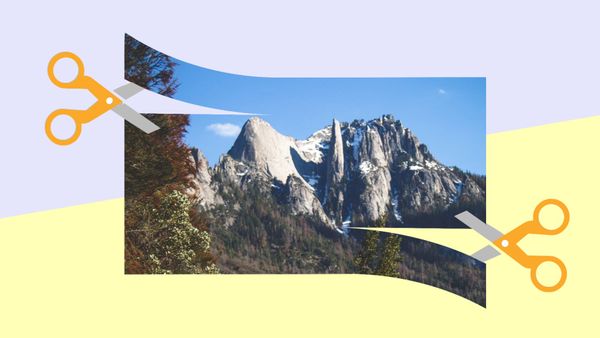 Most online editors don't allow you to fully customize your cropping and output dimensions, and the most robust editors often cost money, or require an app download. In this article, I'll show you a better way to crop using Kapwing.

Kapwing Resources
—
How to Edit a Movie Trailer (For Free & Online!)