My cofounder and I have grown a $20,000+ MRR business in a year with trivial (<$1000) marketing spend. We’re 25-year-old product managers, not marketing gurus, but we are lucky to have discovered the power of SEO early on. Link building is the foundation of SEO, and we've learned a lot about getting people to link to your website along the way.

In this post, I’ll describe the “press stunt” growth tactic and how it has helped our startup grow. For young, savvy entrepreneurs, press stunts can catapult a project into the spotlight and drive enough attention to the top of the funnel to grow a real business.

A press stunt is something you build, write, or do something for the sake of attention from bloggers, journalists, and people on the internet. Press stunts generally don’t have a business or monetary goal, but instead attempt to capture eyeballs and drive traffic to your site.

A press stunt can but doesn’t have to be related to your business; for example, AirBnb sold “Obama O’s” cereal in 2008 and got a lot of attention (Katy Perry did a video eating them), even though cereal obviously has nothing to do with renting homes online. 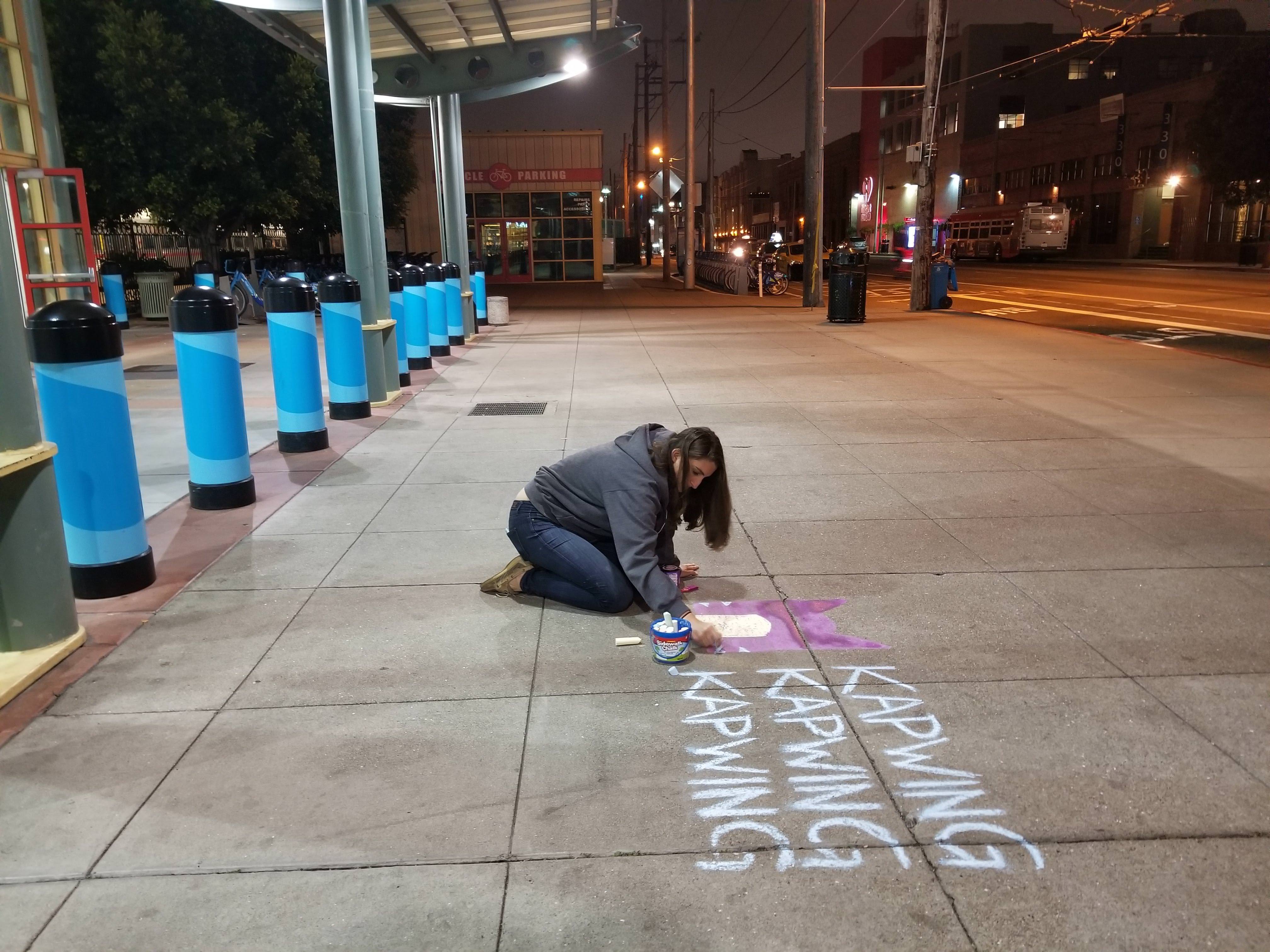 A (failed) press stunt we tried early on: chalking the sidewalks in high-foot traffic areas of San Francisco

A big PR cycle gives your startup exposure, eyeballs, and legitimacy, but more importantly it delivers thousands of backlinks to improve your organic Google rankings. If you rank for target queries on Google and the App Store, your customers can find you in their moment of need, driving organic business value.

To get the SEO benefits, make sure to host the project on your domain. That way, any mention of your project likely comes with a backlink to your website, boosting the PageRank of all of your domain’s pages.

Tech startups have been doing press stunts for decades. Doing a great stunt is an art, so exercise your weird creative muscles to brainstorm and generate ideas. Here’s some high-level inspiration for stunts that have gotten coverage in the past:

Once you start looking for corporate press stunts, you’ll start seeing them everywhere. Last year, Eric and I did daily case studies on growth strategies for now-big startups and learned that many of them started out with successful press stunts.

I’ve noticed that, since the stunts seem silly and unrelated to the core value proposition, later-stage CEOs often leave them out of the founding narrative, saying instead that their company grew through “word of mouth.” But don't be fooled; unconventional PR was essential to early traction for AirBnb, Twitch, Uber, and many other tech giants.

Here are some other amazing press stunts that Eric and I have admired: 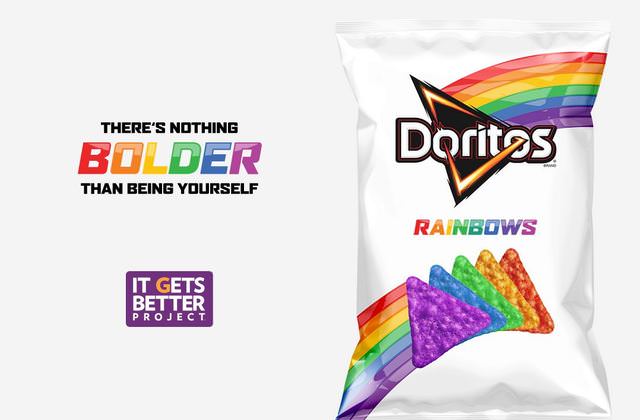 In this section, I’ll tell the story of how we’ve used press stunts to grow Kapwing, our online video editor, and some of our learnings about whats makes a project successful. This is not the full list, but it’s a short list that illustrates most of the things we’ve tried.

Product: Eric is from Santa Rosa, and his parents lived there until the Tubbs Fire blazed through their neighborhood last year. After evacuating, his mom and dad weren’t sure if their home had been destroyed. Eric was following updates closely and saw when someone posted raw satellite imagery of the area. He embedded the images on top of an interactive map so that locals could type in their address and see the before and after photos of their property.

Launch: Twitter and email outreach to journalist. The Stockton Mayor (a friend of mine from college) tweeted the link out, giving us more legitimacy. Eric’s personal story was compelling, so several of the stories mentioned him by name.

Result: Covered in Mercury News, KQED and others.

Learnings: It feels good to build something for your community. Our friends helped us share that story because it made them feel like they were contributing to the cause. 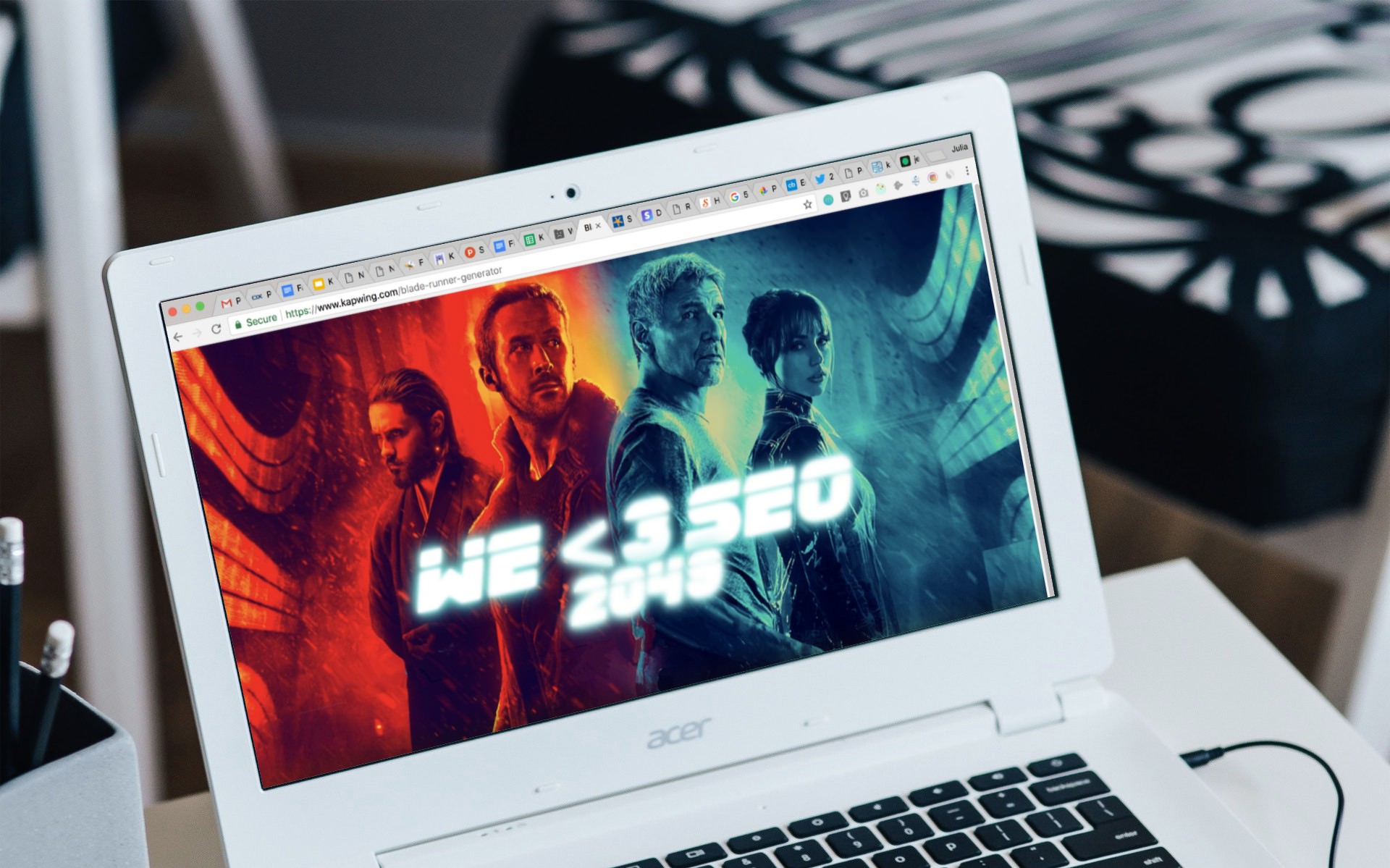 Product: This little website allowed people to type custom text that mimicked the BladeRunner 2049 poster. Originally, we’d thought that people would be able to upload a photo of themself and add the red/blue poster vibe. But when we were unable to execute that in the afternoon we timeboxed for the project, we settled for entering custom text over the movie image.

Launch: We posted about it on two subreddits: r/BladeRunner and r/typography.

Result: It got about 250 upvotes, but no legitimate links.

Learnings: BladeRunner was popular in the tech community, so we thought the stunt would attract attention. But not all press work out. To compensate for the lack of predictability, you have to keep press stunts to an absolute bare minimum to avoid sinking time on a non-essential project. 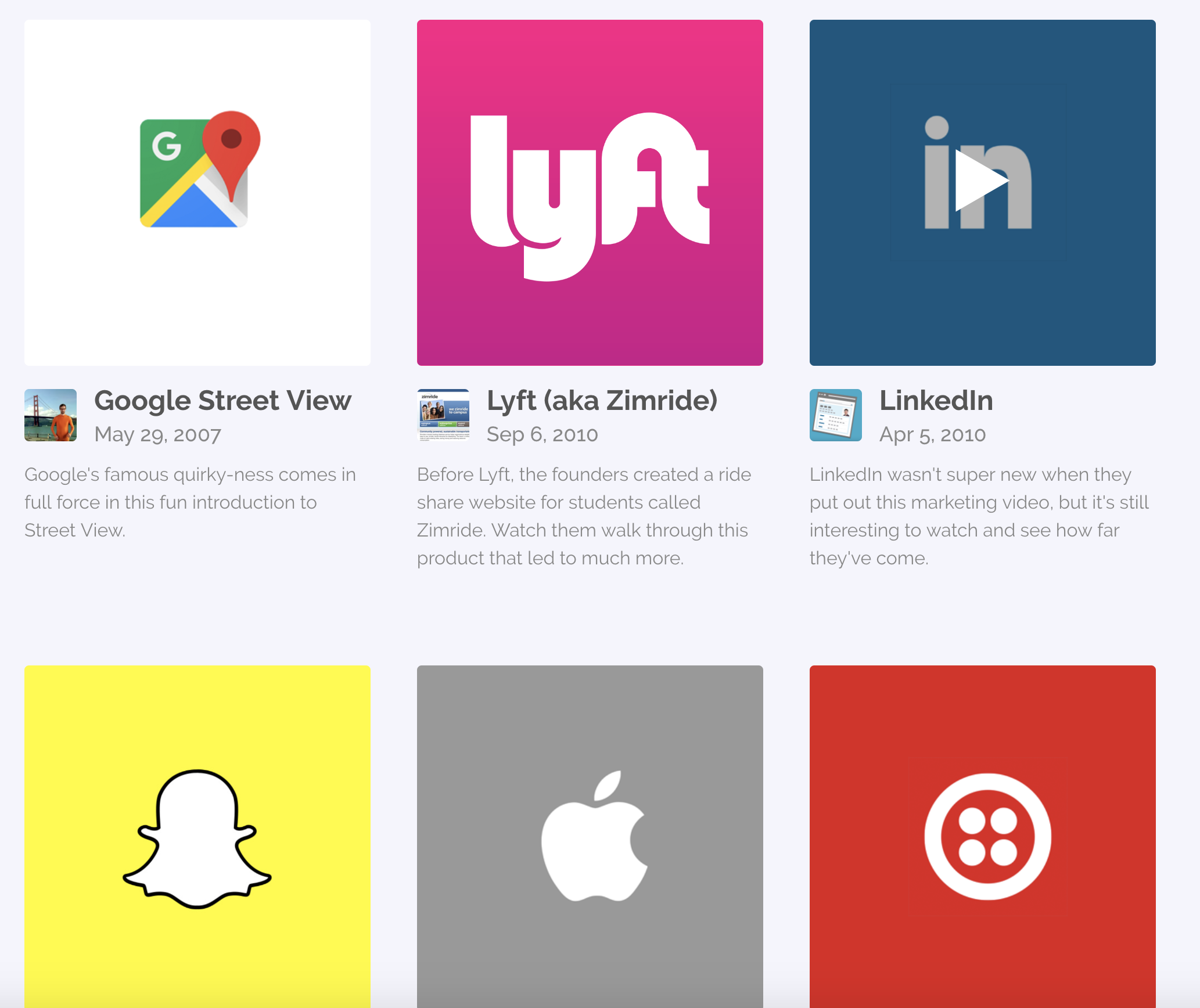 Product: This gallery shows early demo videos of now-popular websites and apps. Some of the videos are YCombinator application videos, like this Instacart example; others are raw selfie videos like Parker Conrads at Zenefits. We got the idea when talking about Startup Pitch Decks, one of the most popular Product Hunt launches of all time. After confirming that it did not exist already, we decided to launch a similar gallery for videos. We scoured YouTube for the earliest video on corporate channels and featured them side-by-side with a nice embedded viewer.

Launch: On Product Hunt. We were immediately featured.

Result: #1 Product of the Day with more than a 1000 upvotes. Covered in Italian Wired. When we were raising money, at least two of our investors remembered having seen Startup Demo Videos when it came out.

Learnings: Makers should always have their launch audience in mind when building the product. Startup Demo Videos was a perfect match for the PH audience.

Product: We came up with this idea as our April 1st stunt, and it was the first Chrome extension we ever built. Friends could install a “Rick Roller” extension on a friends’ Chrome Browser that would randomly redirect them to the Rick Roller video every few clicks. The friend would have to realize and disable the Chrome extension to escape.

Launch: On April Fool's Day on Product Hunt and the Chrome extensions store.

Result: We got featured on Product Hunt, but didn’t do very well. Got a couple of small links, but none particularly noteworthy.

Learnings: We realized that our product wasn’t “cool” enough -- it needed more pizazz to help it take off. Also, it's’ hard to stick out on April Fool’s Day since there are a lot of companies big and small try to pull stunts. 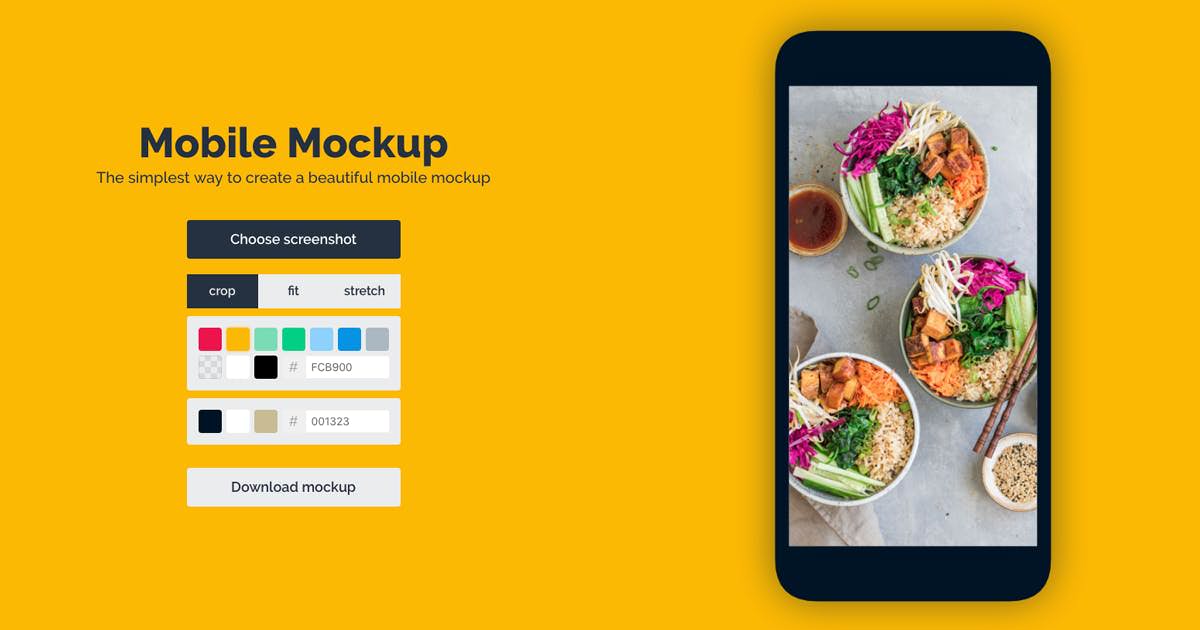 Product: Mobile mockups was inspired by our own need to promote the new Kapwing iOS app. We wanted to host screenshots of the new app in a beautiful frame with our brand colors, but didn’t want the “stock” feel of MockDrop or a similar site. We accelerated this launch by using a similar template and styling as Startup Demo Videos.

Launch: On Product Hunt and DesignerNews

Result: Got a decent number of PH upvotes and came in at #2 product of the day. Mentioned in a few design outlets, including wwWhatsNew, TrendHunter, and a few others.

Learnings: We’d learned to write a Medium article before launching on Product Hunt to increase our chances of getting featured. The links were also highly relevant for us since Kapwing is a design tool, so the articles were rich with our target keywords. 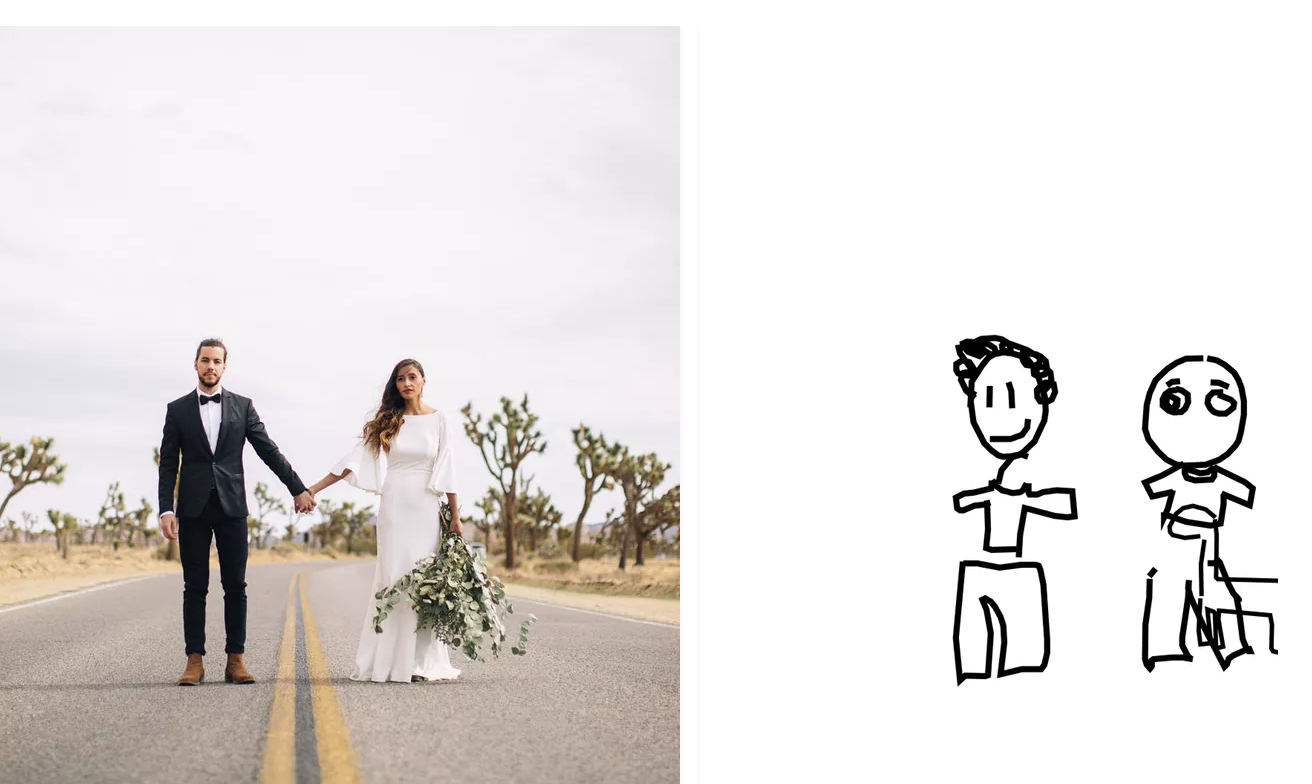 Product: Eric got the idea for cartoonify when we were reading about a successful press stunt executed by Dan Macnish. Macnish had invented a polaroid camera that printed a “cartoonified” version of the photo using AI and open-sourced all of the code. The cartoonify camera was getting a ton of coverage; every major tech outlet had written about Dan. So, Eric took the open source code and made a simple web app and nice landing page to illustrate what would happen if you cartoonify an image you’ve already taken.

Launch: On Product Hunt, DesignerNews, and cold outreach to the original creator (Macnish) and all of the journalists that had already covered his project. Dan Macnish himself posted our project on his blog and retweeted Cartoonify.

Result: Cartoonify has been our most successful press stunt by far. It earned us 70% more than the 2nd best (a blog post on chat bots and gender harassment). Since it’s related to editing media online, it’s relevant to our domain, meaning that the links lend us valuable domain authority in the design and media editing space. Featured in: Resources Magazine, Google Blog, the Verge, and >1500 others.

Learnings: Ideas that are hyper relevant to something that’s getting a lot of coverage are good press stunt candidates since journalists are actively sourcing new material.

Scrappy entrepreneurs can truly run faster than big brands and companies when it comes to press stunts, unlike most traditional marketing channels. If you’re young and plugged in to cultural trends, you have an advantage over busy corporate executives and can do stunts opportunistically. If you’re bootstrapping, unconventional PR tactics give you a leg up over the well-resourced competition and propel a website no way cares about into the limelight. 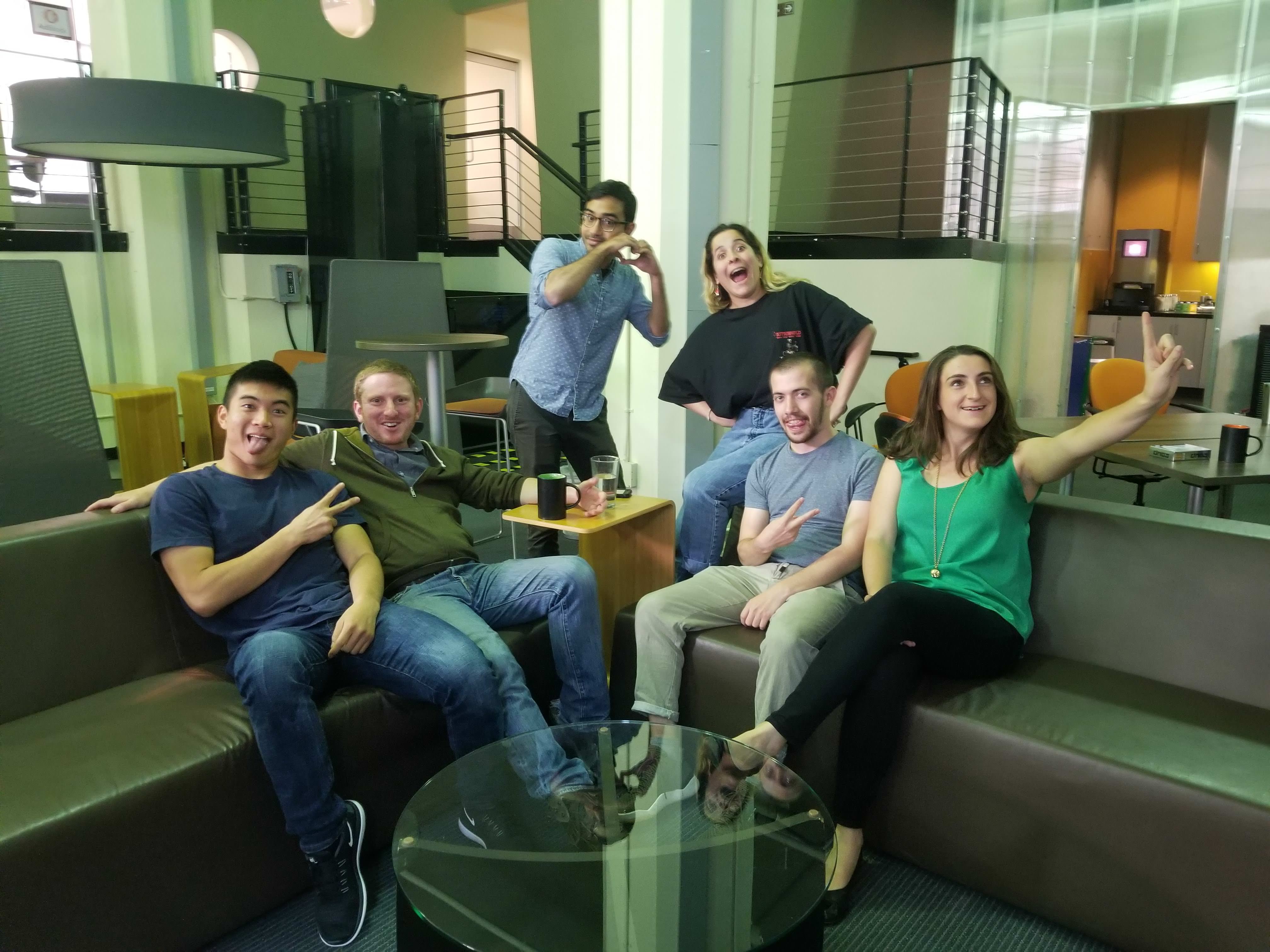 Note: The best press stunt that you can do is to raise money. Even though Cartoonify got us thousands of links, it got fewer and less relevant links than the TechCrunch article following our seed fundraising round did. A lot of publications syndicate funding news, whereas fun consumer webapps don’t get the same re-publishing. That said, PR stunts are a great way to bootstrap traction so that you’re able to raise money on good terms and invest in marketing down the road.

In the first quarter of 2021, we ran 7 experiments on content maintenance to measure the ROI of refreshing old SEO content. Here's everything we learned.
We put a watermark on every video made with our website. Here's the story of the Kapwing watermark and how this growth strategy helped our brand and user base go viral.
Update: Google accepted our DMCA counter notice and reinstated all 317 Kapwing webpages that they took down. In the week that the takedown was in effect, our website traffic was down 30%. A week ago, we received an email that every website owner dreads - a notification of a DMCA