I’m a 24-year-old female web developer and founder of Kapwing, an early-stage software startup. When my co-founder, Eric, and I launched the website in October, we decided to add a chat messenger so that users could message us directly with feedback, feature requests, and bugs. In this post, I'll tell the story of how user responses changed when we changed the photo and gender of our website's customer support agent.

Now, Kapwing is a more full-featured online video editor, but at first, it was just a meme maker. When we launched the MVP, we integrated with Drift, a messaging widget for websites, so we could connect with our users in real-time. 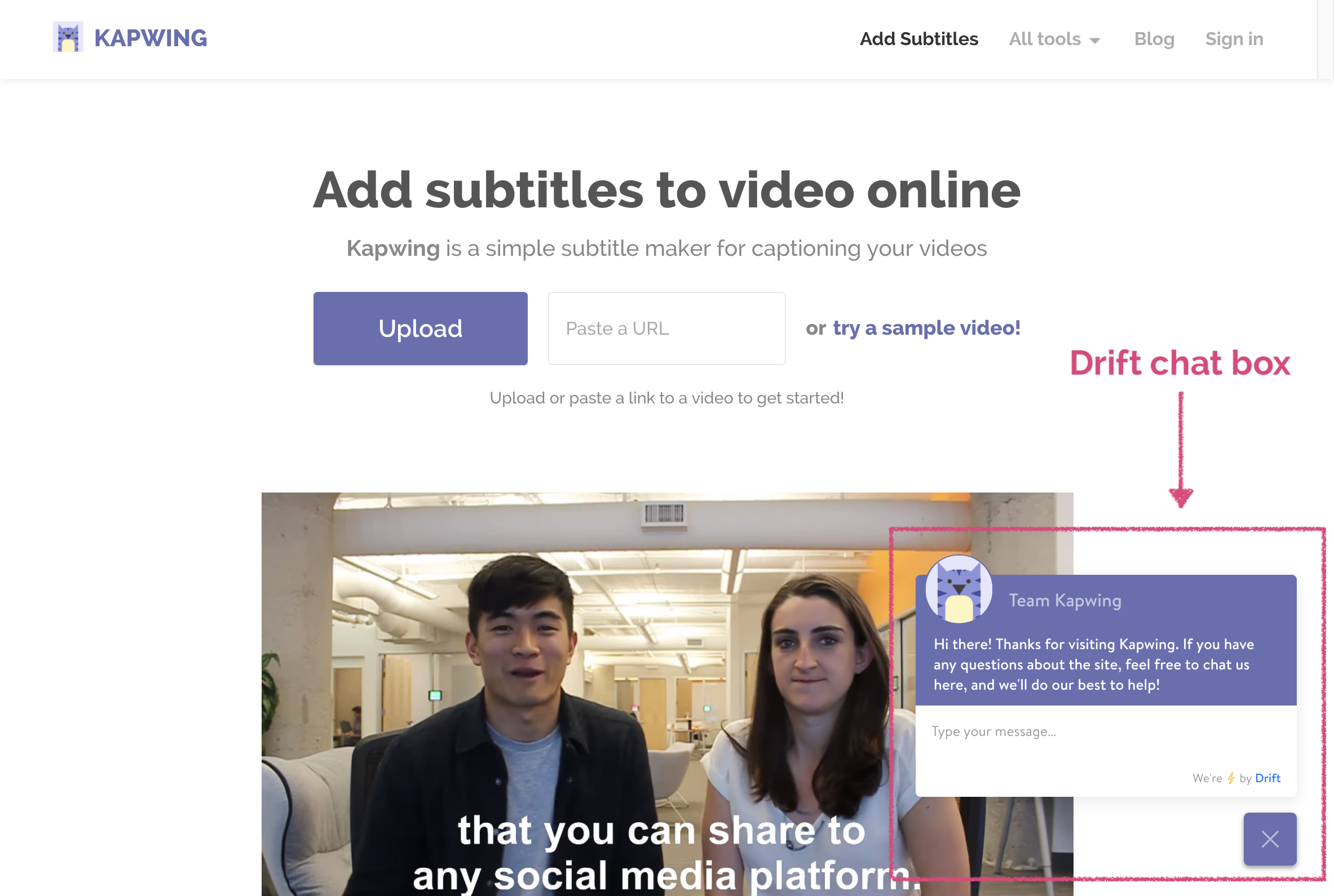 When users come to our website (usually because they Google something like “How to make a video meme”), a chat window pops up in the bottom right corner of the screen with my photo and pre-set welcome message. Users can respond to, dismiss, or ignore the chat box. Since users can report their pain points in real time, many of the comments and questions have been useful as we try to fix bugs and prioritize new features.

When we first added the chat box, I set up a ‘Welcome’ message, added my real name, and posted my LinkedIn photo, not thinking anything of it: 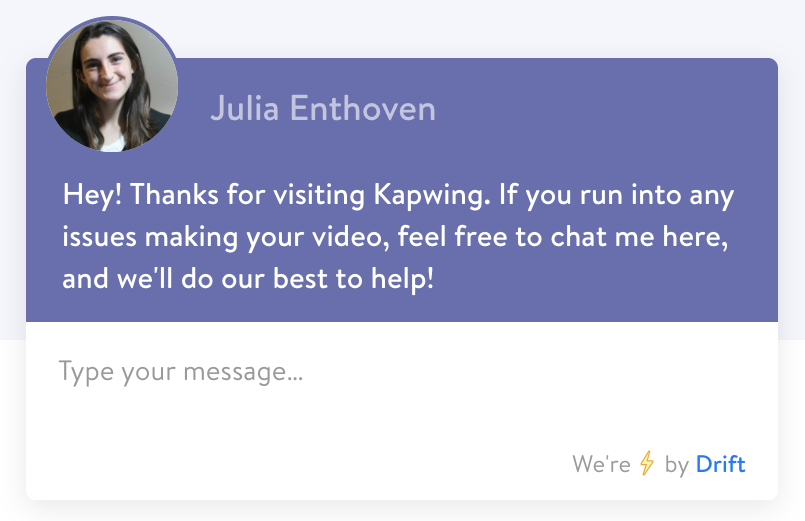 Most of our website users didn’t message back, but some did, and we benefited a lot from feedback in the early stages of the website. But I also got a surprising number of offensive comments. Just about twice a day, a user responded to my welcome message with: 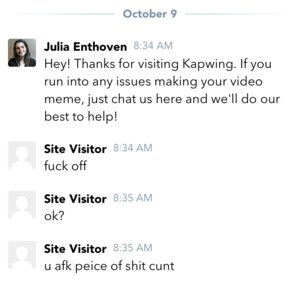 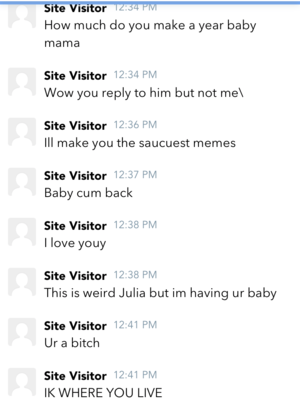 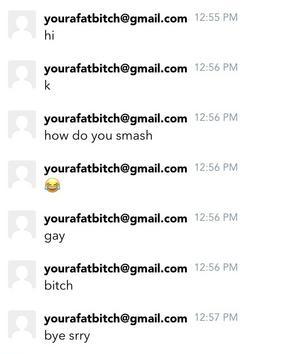 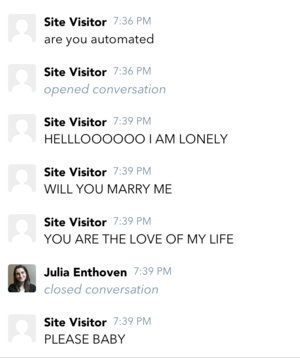 I generally have tough skin for these sorts of things, and, for about a month, I mostly just laughed and ignored the messages. I alternated between my social media feeds full of #MeToo statuses and the Drift app full of heckling.

Then, on Nov 30, I got seven crude insults from users before showing up to the office. Annoyed, I told Eric I wanted to make a change. 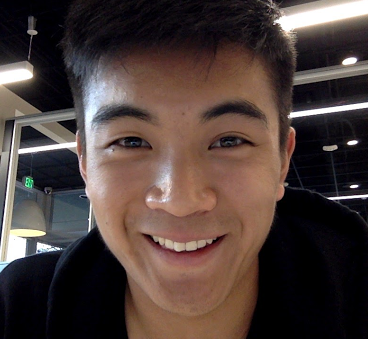 We decided to switch to my co-founder's photo and name to see if it would help reduce the amount of harassment. I would still be the one receiving and responding to messages, but users would think they were chatting with “Eric Lu.”

All of the harassment instantly dried up. Under Eric’s name, I got equally as many questions about our video editor from frustrated and happy users. But four days later I hadn’t gotten any obnoxious or lewd comments. 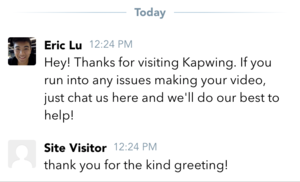 Result: In seven days as “Eric Lu”, I got only one rude-ish message, and it was less severe or personal than comments I’d gotten before. This was the worst: 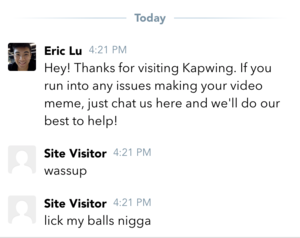 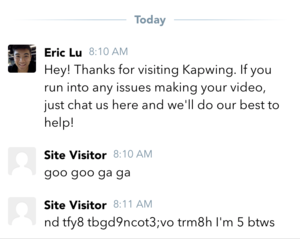 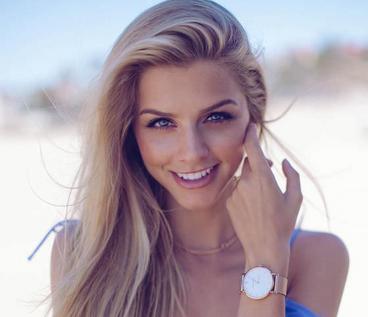 The impact of changing from my own photo to Eric’s was so dramatic that we decided to investigate further. I found a stock photo of a blonde woman who was attractive in an obvious way and chose a stock name - “Rachel Gray” - to see how users’ responses compared. I switched our message avatar from Eric to "Rachel," and immediately - less than one hour in after changing the photo - the heckling and name-calling resumed: 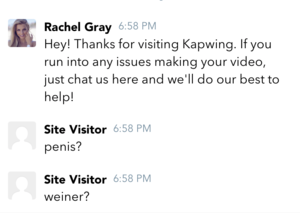 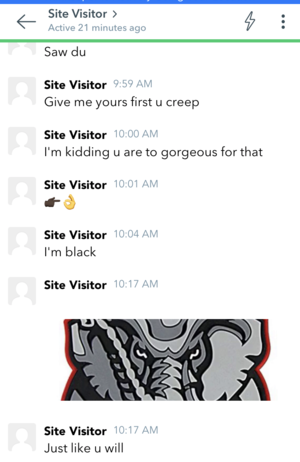 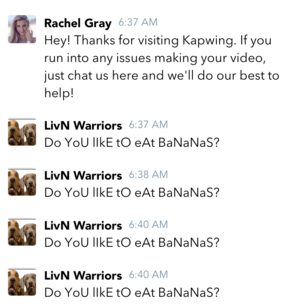 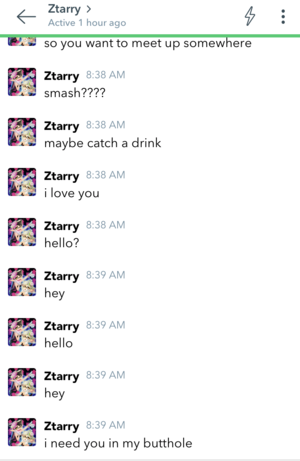 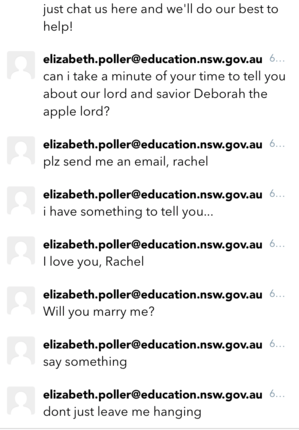 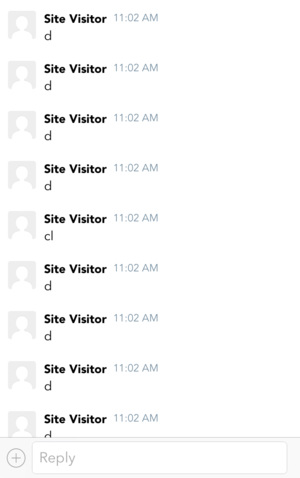 Result: Rachel had it worse than I did. When I counted after three weeks of messaging with Rachel’s name and photo, I saw that we got about 50% more crude, aggressive, and nonsense messages with her avatar compared to mine. People asked her to go on dates, demanded that she share nude photos, and pleaded for all kinds of sexual favors. People called her names, cursed her out, asked her where she lived, and threatened her and the website. Mean, lewd messages came in from all over the world.

Other than the creeps, trolls, and bullies, I didn’t notice a shift in the types of questions people were asking - users with problems on Kapwing still asked Rachel for help. But we didn't analyze the volume of messages, so I can't say if Rachel got more or fewer messages overall. 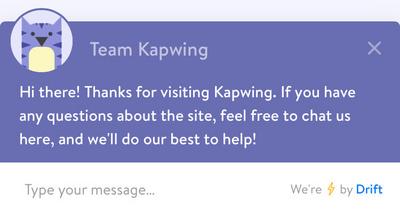 For the last experimental iteration, we changed the photo to our website logo, the androgynous “Kapwing kitten,” with the name “Team Kapwing”. Team Kapwing was up for three weeks (from just before Christmas into January).

Result: Users acted more respectful and friendly than they had towards Rachel. People still complained, reported bugs, and got frustrated when things broke - we had a server malfunction that broke the website for several hours in December - but users comments weren't personal. Apparently, people don’t hit on cats, so I was mostly free from harassment for a while. 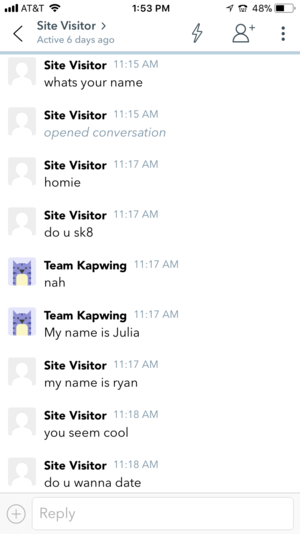 Over these three month, more than 55,000 people have visited the Kapwing website and have made more than 100,000 videos. To date, we've had more than 2,100 messages. Our informal study on the name and appearance of the customer support agent implied a bias against women: 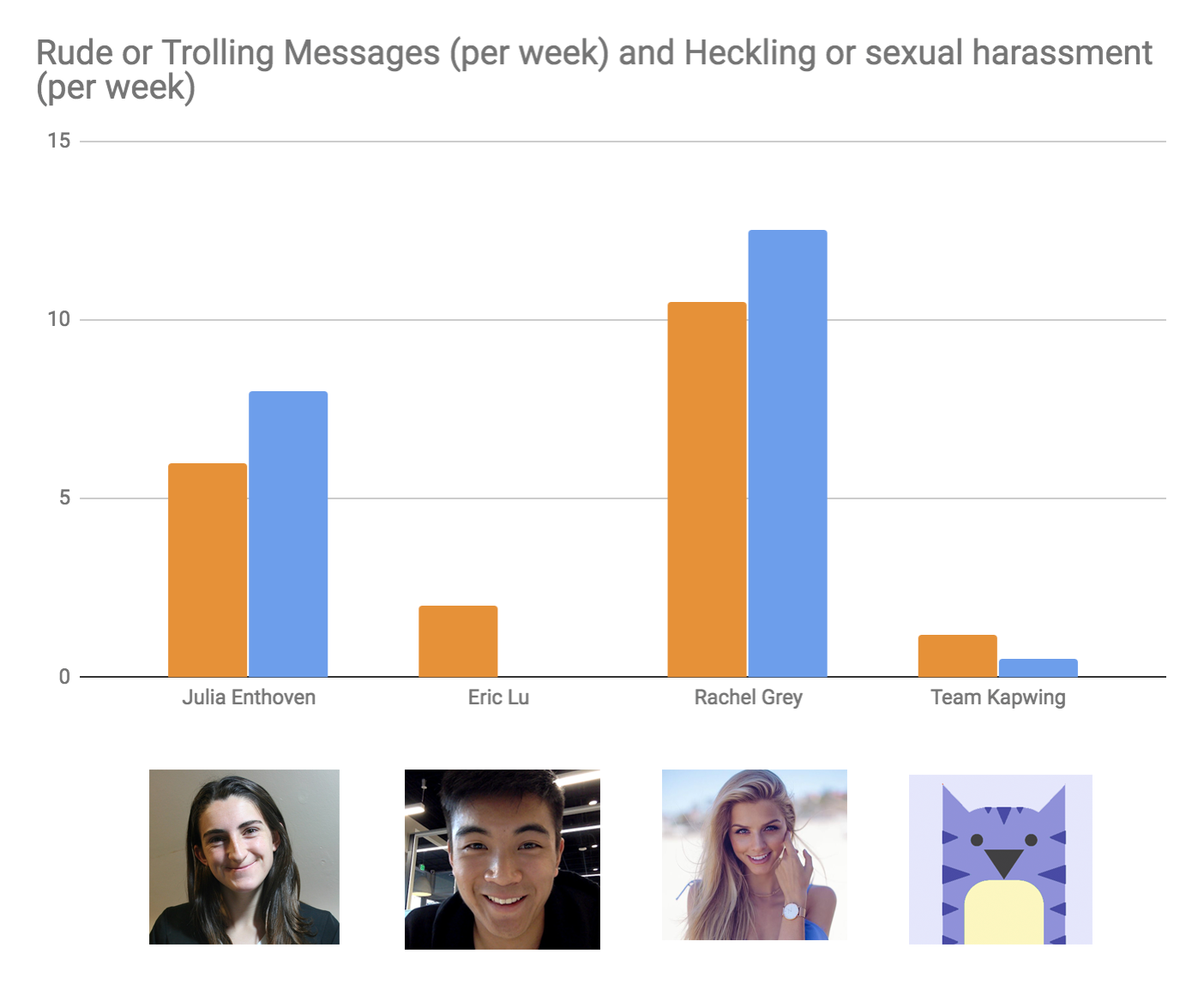 Of course, our experiment wasn’t a rigorous scientific study. Since we did not run the conditions at the same time, there were other variables at work. For example, we ran the Drift experiment over the holidays, which probably changes usage patterns and people's overall mood/stress levels. We were also growing Kapwing, adding features that appealed to new audiences, and steadily increasing our website traffic.

I have three brothers, majored in computer science, and now am starting a company from a Silicon Valley VC office, so I’ve dealt with my fair share of sexism through the years. But this is the first time I have experienced first-hand how differently I would be treated if I could change my gender, at least on the internet. Naively, I was shocked and intrigued by how much more respectful people were to Eric than to me behind the anonymity of a chat box. In the end, we landed on "Team Kapwing" as our messaging support agent, although it's still always me who talks to users. Here are some takeaways for other website owners:

If you're a female with a chat box, you might want a pseudonym: Hiding behind Kapwing's logo and company name on our messenger makes customer support easier and less discouraging. With the "Team Kapwing" name, people tend to assume that the person responding to them is a dude.

Consider the appearance of your support agents: Your customers want someone who looks trustworthy and real, not cute or fake. Represent yourself as an on-brand expert in whatever industry your business operates in and experiment with different faces to see what works best.

Customer support is very human: Even though the internet puts distance and anonymity between website creators and their users, remember that there are humans on both sides of the screen. People love to chat, tease, and make friends, even if they know nothing about each other. They make spelling mistakes, jump to conclusions, use emojis and slang, and can be inpatient and insensitive. Although users are sometimes hurtful, it's fun (and sometimes a waste of time) to connect directly with the real people using your product.

Thanks for reading! Keep reading this blog to follow along as Eric and I grow Kapwing to ramen profitability.