Hello world! My name’s Grace. I’m a rising senior studying public health at Johns Hopkins University, and I love creating videos, adventuring, laughing at memes, and telling stories. That’s how I ended up interning as a Growth Marketing intern at Kapwing, a San Francisco-based startup.

On my first day of work at Kapwing, my coworker Peter and I were challenged to put up 400 posters around the Bay Area in one day. The company we’re working for has a history of non-traditional marketing, and our CEO wanted us to get an experience with scrappy tactics as our first project. We were given a budget of $500 and told to go do.

Putting up posters may sound like an unscalable use of time and energy, but non-traditional, scrappy experiments can be a really important learning experience and catalyst for ideas down the road. When every Instagram ad looks the same, unconventional PR and stunts can get people talking and revolutionize the growth of a company efficiently. Almost every company will use traditional marketing tactics, but few try to grow through stunts. It’s been working for Kapwing – press stunts have been a huge factor in its growth since the beginning. These stunts and projects add to the brand and personality and make it lovable and fun.

With unconventional PR as a growth tactic, the only way to see if something works is to try something different. We knew postering the city could be a complete flop. But there was only one way to find out.

From Monday to Thursday, we planned. We decided what our target markets were, researched locations with community bulletin boards and the legality of posting on street poles. We found coffee shop chains like Philz in addition to public libraries have boards for posters. As long as the flyers meet these size and shape guidelines, postering on public property is legal in San Francisco except for on historic street light poles. Finally, on Friday, we embarked on the adventure (watch it here!). Here’s what I learned through the process and the advice I would give to anyone trying postering as a growth marketing tactic. 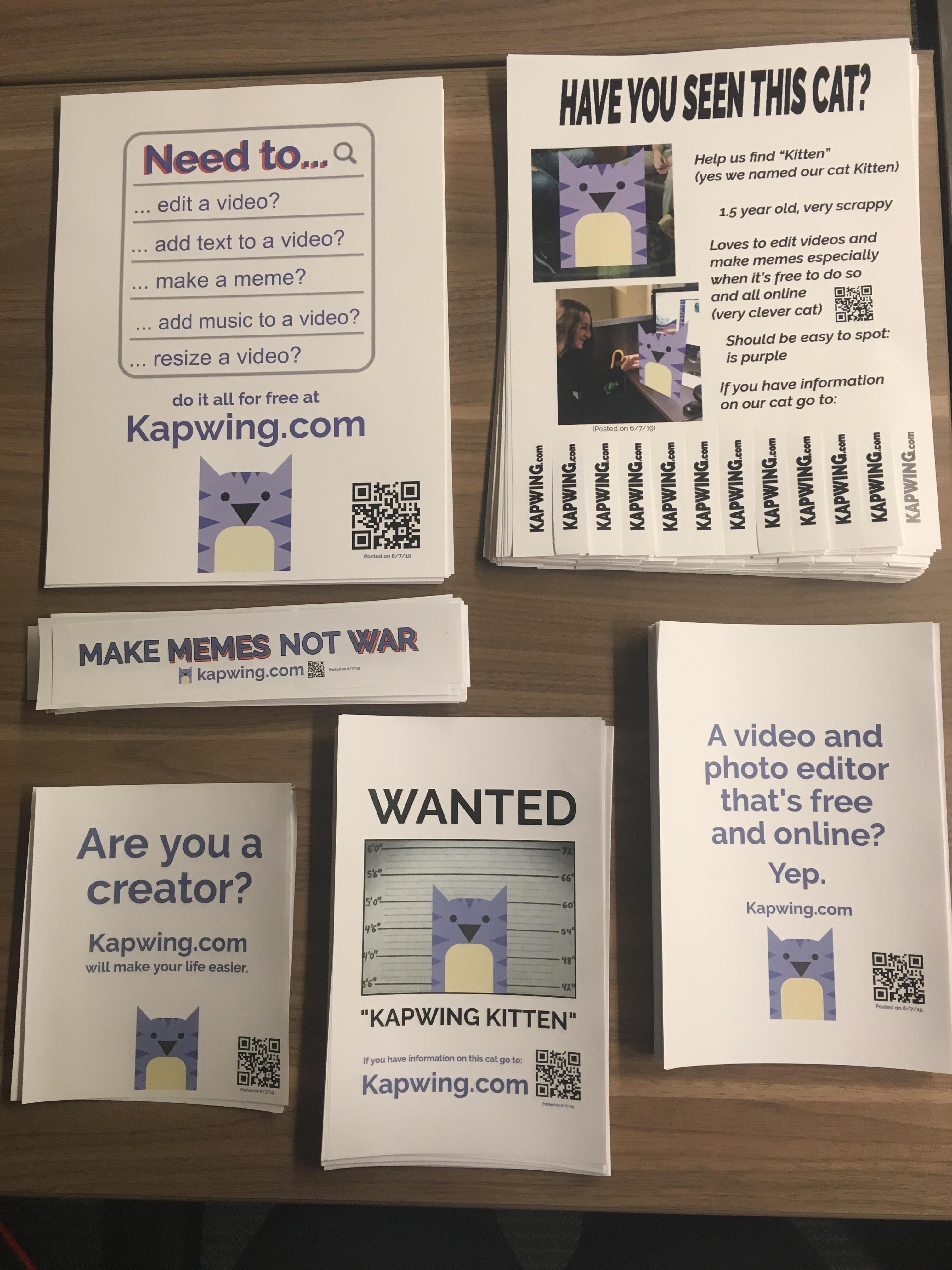 All posters were made with Kapwing! 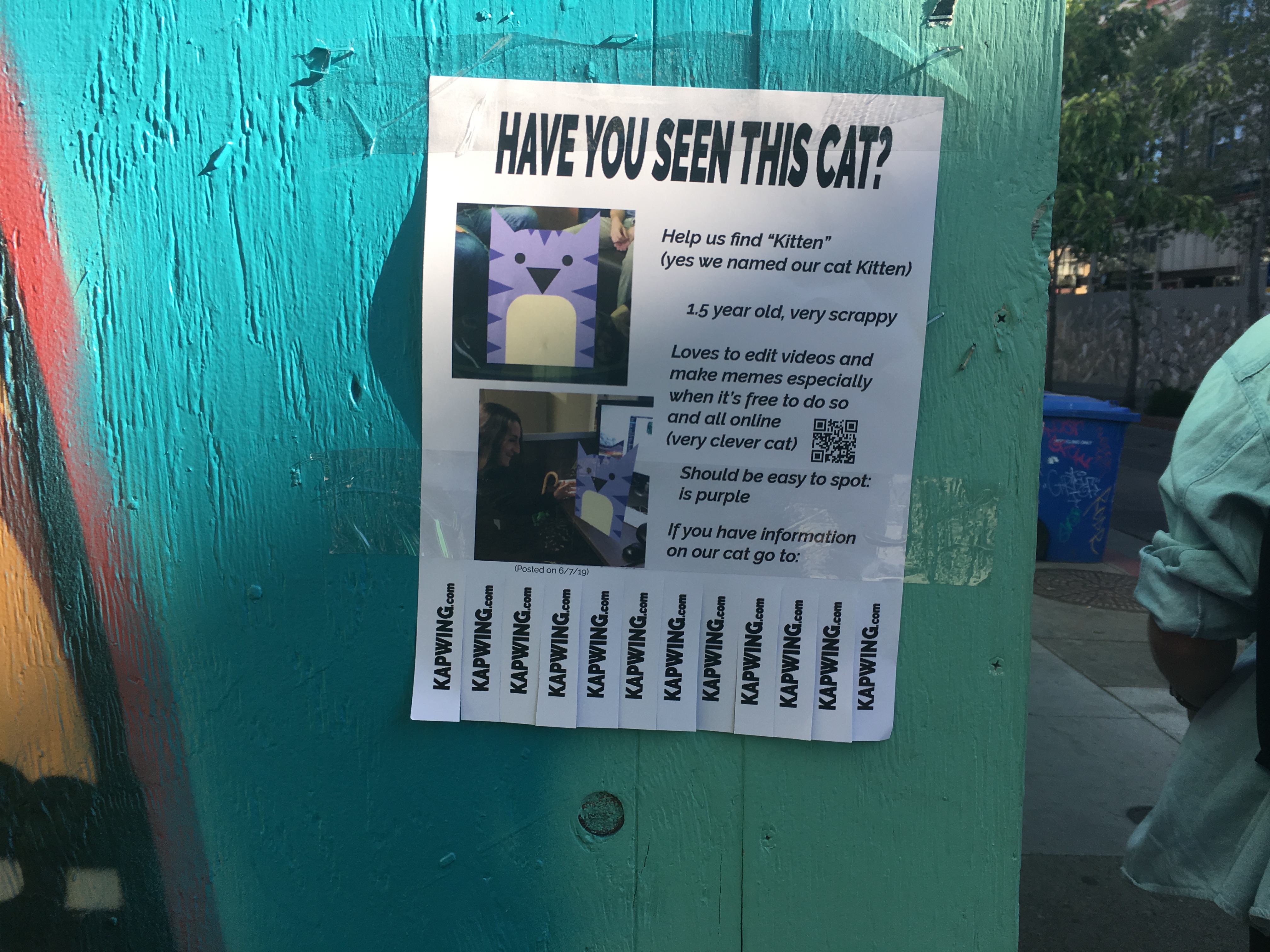 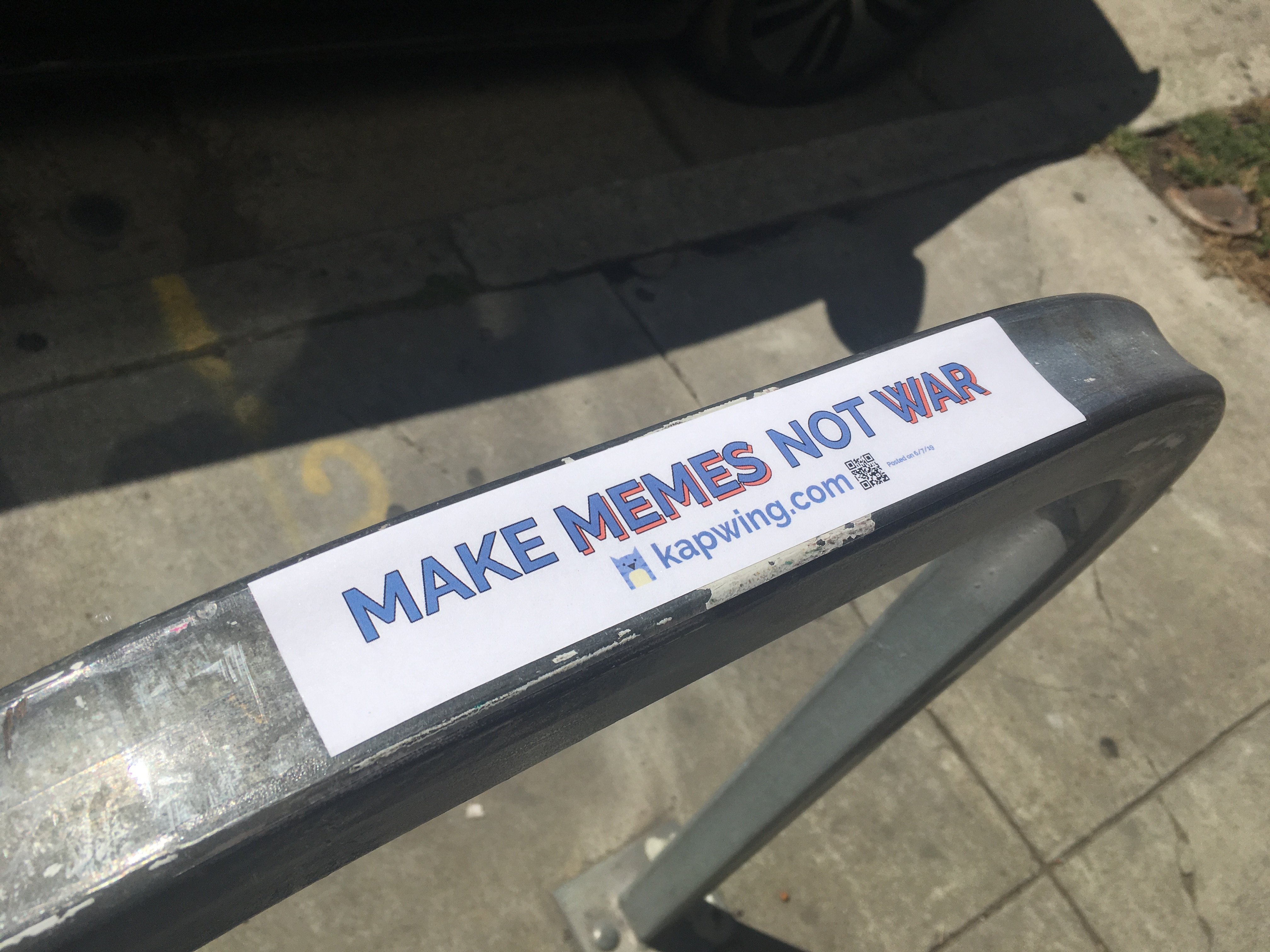 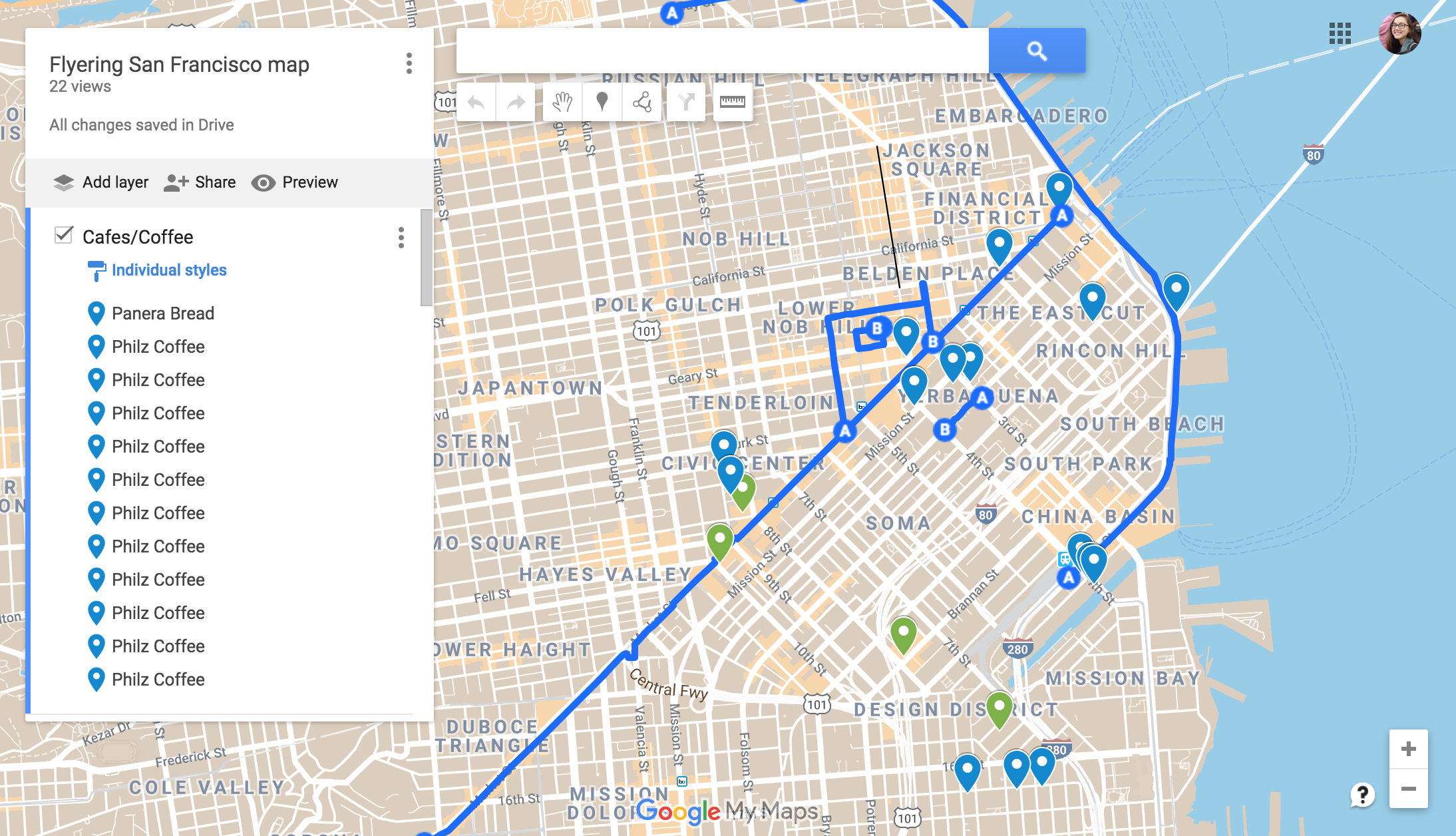 We only ended up putting around 3% of our posters on indoor boards – the other 97% went up on outdoor bike racks and street poles! 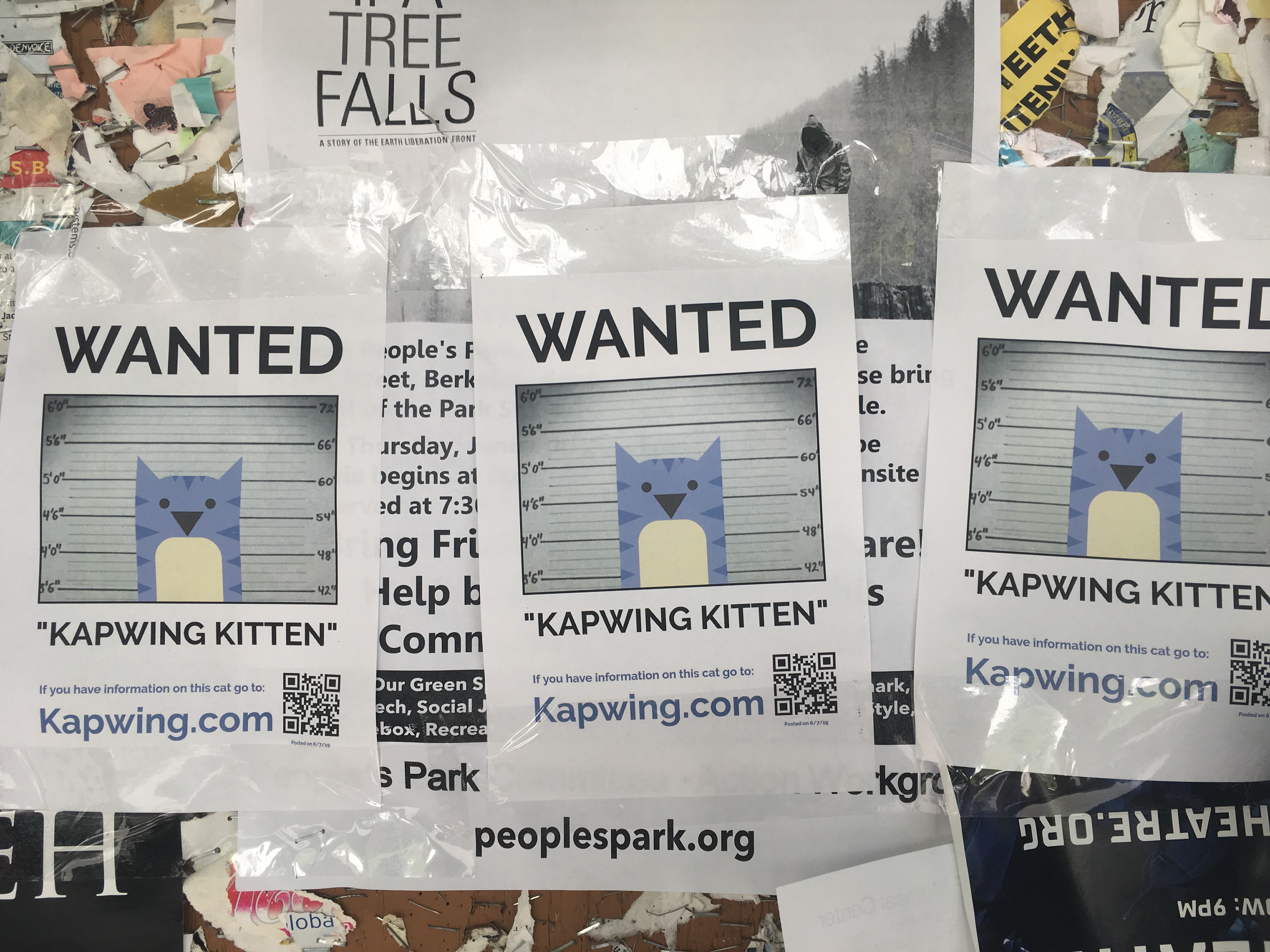 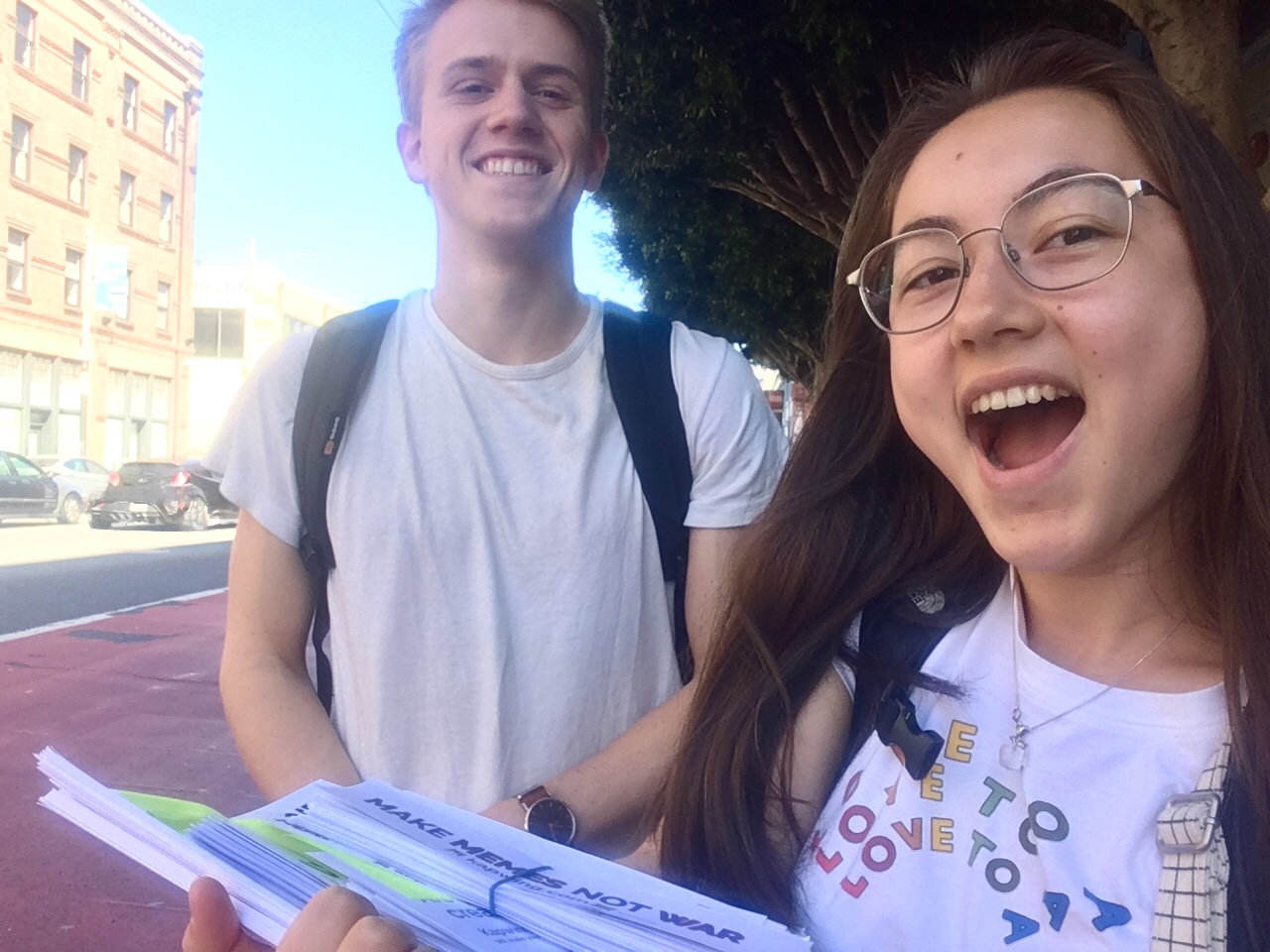 The results of our experiment

By the end of our 8-hour workday, we had:

As of the posting of this article, the QR code on the posters has been scanned 47 times. That doesn’t sound like much. But each one of those scans represents someone who was curious enough to go through the effort of pulling out their phone, scanning the QR code, and looking at the Kapwing website. Many more people have seen the posters and registered the name Kapwing in their minds. Maybe they even looked up Kapwing directly through Google or typing in the URL.

We took a picture of (almost) every poster we put up. Here’s me scrolling through all of them.

If you’re wondering whether any of the posters got taken down after a few days, my answer is that I don’t know. I haven’t been back to most of the areas where we put them up, but I do walk by one of them everyday on my way to work. Half of it has been ripped off, but most of the poster is legible anyway. Even as I write this the number of QR code scans is continually increasing though, so that’s a good sign.

I couldn’t have asked for a more ideal starter project. It allowed me to explore San Francisco, manage a mini marketing campaign and budget from start to finish, and get a taste of Kapwing’s company culture. Peter and I had to be scrappy, fast, creative, and inventive. We had to make judgement calls about the best way to handle Kapwing’s brand, evaluate user-facing creative, and tell a story along the way. As a growth marketing strategy, postering a city is a great way to spread the word about a brand in physical spaces and capture an audience that you may not be able to reach online. So here’s me passing the challenge on. If you’re company is scrappy and down to try new things, I challenge you to put up 400 posters in one day. Let us know how it goes! 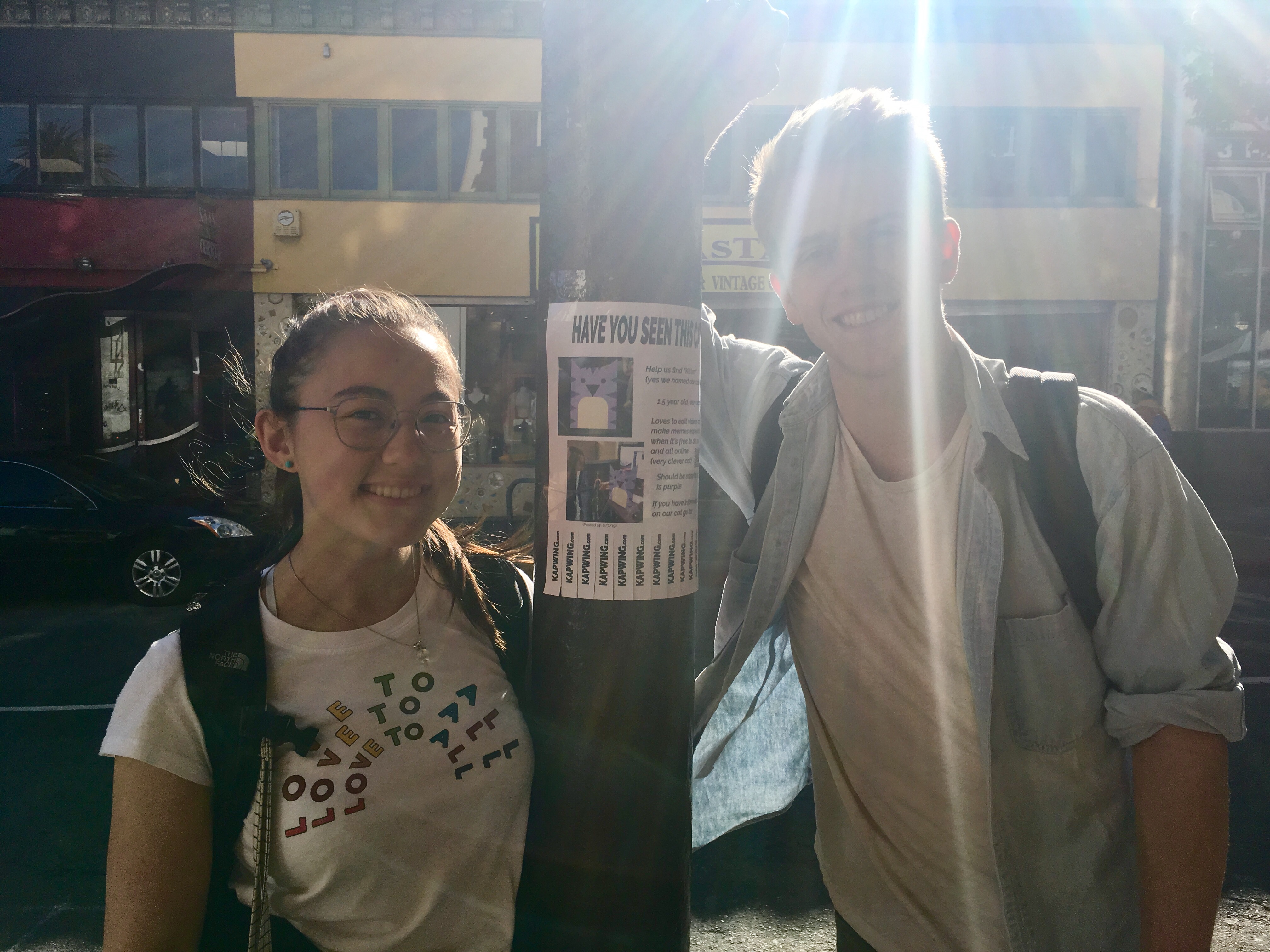