Five months ago, my co-founder and I started a video editing website called Kapwing. We have been building Kapwing with our own savings and haven’t taken any investment or debt, so we own 100% of the small company. Recently, we’ve been discussing whether to raise money or to keep bootstrapping.

Don't and Do are the fundraising angel and devil in my head. They’re arch nemesis and equally matched. In this post, I’ll share some of their loud daily chatter, the internal dialogue that’s stopping me from making a decision about whether or not to raise money for our startup.

A conversation with myself

Do we need money?

*Do*: Yes, it’s time to go raise. Just think about what you could build with two more engineers! With a million in the bank, you could afford to hire a couple of engineers, to experiment with marketing funnels, and to pay rent for office space. Aren’t you sick of ramen? Your body needs protein!
*Don’t*: No, you don’t *need* the money - Kapwing is doing fine with two technical founders. What’s wrong with working from home and ramen? Frugality is good for the business.

*Do*: You’re going to need capital eventually and fundraising will probably take a while, so you might as well start now.
*Don’t*: Ugh fundraising seems like a distraction - it cuts the company engineering resources in half! If Kapwing keeps growing, you'll be able to bootstrap your way to millions. Then investors will be banging down the door to give you money!
*Do*: Yeah in like 4 years. Want to go 4 years of working out of your home with a team of 2? Someone else is going to beat you to it.

*Do*: There’s no way to grow this to be a billion dollar business without capital.
*Don’t*: True. But does a $50M business split between two of you sound so bad?
*Do*: You probably can’t get even to $1 million on your own! Good luck even getting to $50K MRR in 5 years. Better to raise before you die.

Is it too early?

*Don’t*: Kapwing is still so small, and you’ve only been working on it for a few months. It’s too early to raise. You’re being impatient.
*Do*: You have a live product that’s making a good amount of money and has hundreds of thousands of users. You’re way farther along than most startups.
*Don’t*: But you’re both first-time founders. You should be making a few hundred thousand before you take someone else’s money.
*Do*: Profitability doesn’t matter when you're building a consumer product! Plus it’s so easy to raise in the Valley these days. Didn’t you go to Stanford and work at Google? With two technical founders, people will give you $500K or more just on your pedigree.
*Don’t*: You're literally 24 years old and don’t have any idea what you’re doing. That cannot be true.
*Do*: You have inbound investor leads. Just put together a deck and talk to them.
*Don’t*: Yeah, but who know if they’re serious or not? The meetings are a waste of time. You could be shipping features. When you have millions in revenue you won’t need a deck.

*Do*: Getting investment validates the idea. VCs see hundreds of pitches and only choose a few to put their money behind.
*Don’t*: You know what’s validating? REVENUE. Growth. Users. Focus on that. Just because someone gets institutional money does not mean their startup will be successful - just look at [Juicero](https://www.theguardian.com/technology/2017/sep/01/juicero-silicon-valley-shutting-down). Some investors won’t buy in to Kapwing because they don’t think today’s video editors suck, and you’re not going to be able to change their mind with a powerpoint. It’s a better use of time to prove it to them by acquiring customers and growing fast.

*Do*: Investors can be helpful advisors, advocates, and sales men.
*Don’t*: Investors also get in the way. It’s going to take some weird creativity to grow a consumer business, and investors can’t really help with that.
*Do*: Who are you going to learn sales, marketing, recruiting, financial modeling from? MBAs would be great role models and coaches for that part of the business.
*Don’t*: You can learn from the [Xoogler](http://xoogler.co/) and [StartX](https://startx.com/) founder communities, and you already have some amazing mentors. You can pick up these skills as you go - you’ve already been doing well!
*Do*: But VCs have so many resources. They have designers, accountants, and lawyers on staff. Annoying tasks that would take you hours and cash take them minutes, for free. You’ll be able to spend more time on the company and less time on admin.
*Don't*: You left your comfy corporate job to work for yourself. Why the rush to work for someone else?? 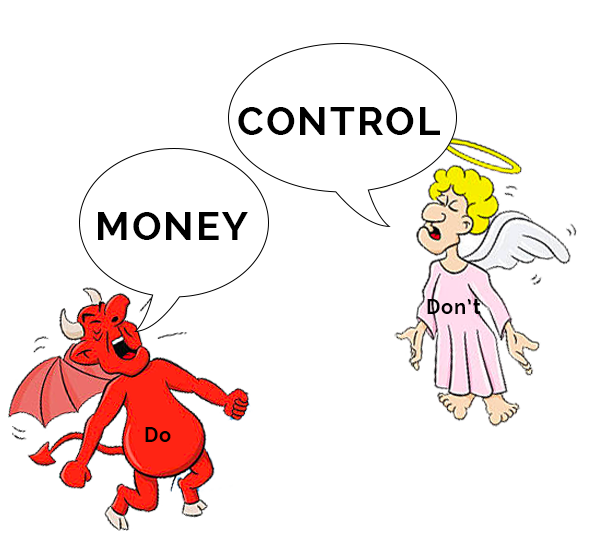 On being a woman

*Do*: You’re going to learn a lot from the process of fundraising. Plus, defining and articulating your company vision will help you clarify it in your own head.
*Don’t*: Sure, but your vision is going to change so much - flexibility is good. We have ideas for what comes next, but first we’re focused on building the leading video editor and brand. You’re mostly grandstanding if you think you can say what comes next.

*Do*: DoorDash just raised half a billion dollars!! And your margins are way sexier than theirs.
*Don’t*: DoorDash needs the money because their business is capital intensive. Kapwing doesn’t - it’s a pure software business. Why would you sign away control??
*Do*: Every big company raises money. Instagram, Snapchat, Musica.ly, Vine, VSCO, and all the other creative greats raised hundreds of millions of dollars. [Fishbrain](https://techcrunch.com/2018/03/07/fishbrain-the-fishing-app-and-social-network-raises-13-5m-series-b/), a social network for fishing, just raised >$13M, and video creation is definitely a bigger market than fishing.
*Don’t*: Take your Silicon Valley goggles off! Many companies don't ever raise venture money, and those founders have the biggest upside.

*Do*: Why don’t you just go raise money?? Are you afraid?
*Don’t*: Don’t be a wimp - build the business until you can raise on your own terms

Like many decisions I make for Kapwing, I don't know if I'm making the right one or not by waiting to fundraise. Spending someone else's money and giving up control feels high stakes, so I'm waiting to feel more conviction about raising before I do. If you have advice or you can relate, I'd love to hear from you at [email protected] or on Twitter.

This month, Kapwing officially hit ramen profitability! That means Eric and I can afford to pay rent and then some, which is not trivial in San Francisco. Thanks for reading, and keep following our blog as we try to grow Kapwing and make a living along the way.