When we first set out to build Kapwing, a collaborative online video editor, our approach to getting positive reviews online was to focus solely on building a good product. We subscribed to the prevailing startup wisdom to "make something people want". Our thinking was that building a great product would eventually lead users to leave us great reviews, and if we got negative reviews, then that meant that our product had areas that needed improvement. However, the reality was that even as our video editing software got better, we didn't get more positive reviews. We realized that to get the reviews we wanted, we needed a specific strategy around reviews - it wasn't good enough to build a better product. In this post, I'd like to share some of our learning lessons around reviews for Kapwing, and some strategies for building positive reviews that you can apply for your own product or startup.

Reviews and star ratings today play an important factor in whether a user decides to try any product. In fact, one of the main suggested searches on Google if someone searches for Kapwing is "Kapwing reviews". Prospective users rarely read every review, but many will glance at a star rating and make a judgement of whether it might be good enough for them to try it. Having a rating of less than 4 stars on various review sites can be harmful, as users would look for a tool to edit their videos, and then choose a more higher reviewed product over ours instead of Kapwing.

Over the last two years, Kapwing's ratings on popular review sites like Trustpilot, Google, Capterra, and Product Hunt mostly stayed around 3 stars, even though we knew and heard from our users that our product made significant improvements. On Google, Kapwing had 14 reviews for a 3.2 star rating for over a year, and 3 of these reviews were from trusted friends who gave us a positive review just to support our company. It hurt to see negative reviews, but more importantly, it was confusing for us. We knew we were making significant improvements to the product. We knew that users had positive feedback and told us that Kapwing was significantly helping their video editing workflows. So, why weren't we getting more positive reviews?

We knew from user research and feedback that Kapwing was a better solution than some of the products that had higher ratings. We also had worked consistently to address user feedback and close bugs that had caused negative reviews. But still, we weren't getting the positive reviews that we wanted, or needed, to compete against other services.

It took us some time to realize that positive reviews for a product are almost never unsolicited. Even if a user has the best possible experience with a product, they will almost never go out of their way to leave a positive review. They may tweet about the product or share it with a friend, but they will very rarely care enough to go to a review site and leave a positive review on their own. On the flip side, a user who has a negative experience will go out of their way to leave a negative review. They may not just leave one either - some negative reviewers left a similar review on multiple review sites to ensure their voice was heard.

We looked at how other companies approach reviews and building better ratings online and we realized that products with more positive reviews nearly always prompted users to leave a positive review in some way. Many popular apps, for example, will prompt users to leave a positive rating and some do it in certain moments, like when an action has successfully completed, to boost their reviews.

Garnering reviews for a web based product is a little different, since there are many different review websites that showcase reviews for a product. Just searching for "Kapwing reviews" there are multiple players competing for space in Google's results, including Product Hunt, Capterra, Trustpilot, G2, Sourceforge, and Google itself:

For web developers, reviews are not aggregated in a single place, so founders need to think about how to garner positive reviews across all properties which makes the task a little harder. Review websites also want more traffic to their own sites, and will auto-generate pages for your service that rank on Google, forcing founders to build positive reviews on their domain. Regardless, having a strategy around building positive reviews for your startup will certainly help with user acquisition and product discovery down the line. I'd like to share some learning lessons for anyone trying to build more positive reviews for their product:

When we launched a small feature that made it more clear to our users how to leave reviews for Kapwing, then many users clicked through and left us hundreds of positive reviews. We were reluctant to launch a feature like this, because we had so strongly believed that if the product was good enough, then users would be inclined to leave positive reviews. However, we realized that users just need a little nudge and then they will say positive things to support the product. Without these small nods, only the users with a negative experience would choose to leave the feedback. Today, hundreds of users click through to leave us reviews every day, and it leaves a much more positive impression for new users discovering Kapwing for the first time.

I would encourage other founders to think about how and when to prompt users for reviews within their own products. Reviews are critical for user discovery, and focusing solely on product will often times cause this area to be neglected.

In the beginning, we didn't quite realize how damaging a single negative review can be for a product. If you're trying to build a product with a rating higher than 4.5, but you get a single 1-star review, then you'll need to garner 9 more 5-start reviews in order to have a 4.6 rating average. A single negative review will need almost 10 fold positive reviews to result in a positive overall rating. This is even more critical on sites like Product Hunt, where users can either "recommend" or "not recommend" a product which means that a single "not recommend" will bring down the average a lot.

It goes without saying but giving users a positive experience and resolving their issues will go the farthest in terms of preventing negative reviews. At Kapwing, we've been heavily investing in fixing the most common bugs, and trying to close the loop completely on users' video editing experience. This has prevented many negative reviews, especially as users can see that their experience improves.

Following up with users has lead us to discover the root causes of their issues, and leaving a public reply shows that our company reads and takes negative reviews seriously. Sometimes, angry users have deleted or edited their review after a follow up and that has helped our ratings over time.

MVPs should be delightful

While we believe strongly in the power of MVPs for startups, having a buggy MVP can result in disappointing reviews that stick around for a long time. We first launched Kapwing on Product Hunt in 2018, and some of the most negative reviews were left back then when our product was still early and had many bugs. However, these negative reviews can't easily be removed even though we've made significant improvements to the product in the last few years. Users still see these reviews, and make judgements on Kapwing today based on reviews that were left 3 years ago. If we were to go back in time, we'd think more carefully about this initial launch and try to have a more concerted effort to build more positive reviews from the start. Having an MVP that can result in user delight is important and something we didn't value as much at the time in favor of being scrappy and fast.

On the open internet, people will say some very mean things about your product. Startup teams have to be able to stay positive and optimistic even when users are throwing abuse or mean-spirited comments. I will often times will just do a simple breathing exercise when reading extremely negative reviews and try my best to empathize with frustrated users as human beings. Staying professional and positive has always been more productive for our team and the company.

When it comes to positive feedback, make sure to celebrate it with your team! We've gotten so many positive reviews for Kapwing recently, and we've been happy to see our hard work and efforts pay off.

Startup founders building new products have to think about reviews separately from a product strategy. Positive reviews don't just come out of thin air, and negative users can be very powerful in today's day and age of ratings and reviews. Thinking about ratings and reviews from the beginning days of a startup can pay dividends down the line when it comes to user acquisition and growth over time.

Did you like this article? Then there's no better place than to ask you for a positive recommendation of Kapwing on Product Hunt! :) Please leave your feedback and reach out to let us know if you have any ideas for how we can improve Kapwing. 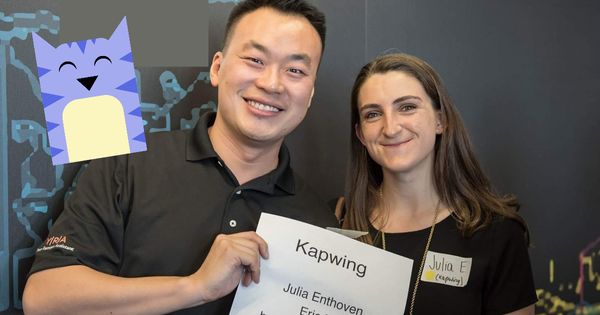 In honor of Kapwing's four year anniversary, I wanted to share some of my learnings from the journey in Startup Land. Here's 10 non-secrets to success for other entrepreneurs just starting out. In our three years of trying to recruit top engineering talent, we've made 36 job offers to engineering candidates, and 16 of them turned us down. Here's what I've learned about convincing engineers to join your startup.